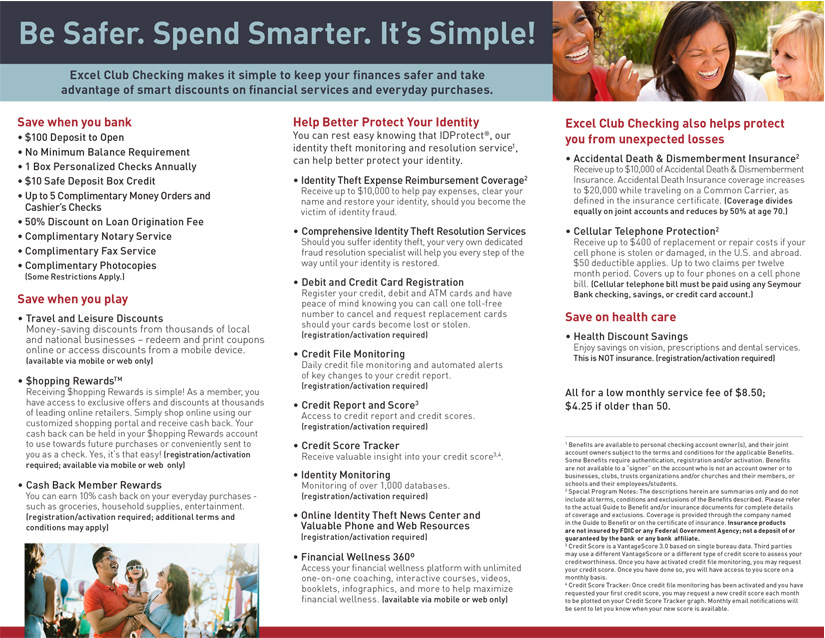 We hope that you are as proud of our new website as much as we are! We made these changes for many reasons. Our biggest reason was to provide you, our customers, with the services that you have requested in our Facebook Survey's. We have provided you with a more user-friendly website with responsive features that will adjust to any screen that you are viewing us on.
Other New Features include:
Our new system will allow us to offer you more services in the coming months.
Check out the video's below for more information.

The Seymour Bank would like to invite you to our annual Holiday Open House. This annual event consists of cheese and crackers as well as cookies in the lobby.  This year we have a special event going on thanks to Santa stopping by early.  We will be giving away a 32GB iPad Mini on Friday, December 21st.  You can enter by coming into the lobby of either of our banking locations or by going to our Facebook page.  All you have to do is answer 2 questions and your name will be entered.  If you are a Facebook fan of The Seymour Bank feel free to invite your friends to be a part of this giveaway as well.  By liking The Seymour Bank on Facebook your friend and you get an extra entry into the drawing.  All they have to do is write on our wall and state who it was that sent them.
Good luck and hope to see you there!

The SEC's Office of Investor Education and Advocacy is issuing this Investor Alert to warn you about investment scams that purport to offer investorsthe opportunity to buy pre-IPO shares of Facebook, Twitter, Groupon, orother popular companies. SEC staff is aware of a number of complaints and inquiries about these types of pre-IPO investment scams, which may be promoted on social media and Internet sites, by telephone, email, in person, or by other means.
In September 2010, a judgment order was entered in favor of the SEC based on allegations that a scam artist had misappropriated more than $3.7 million from 45 investors in four states by offering fake pre-IPO shares
of companies, including Centerpoint, AOL/Time Warner, Inc., Google, Inc., Facebook, Inc., and Rosetta Stone, Inc. In addition, the Financial Industry Regulatory Authority (FINRA) issued a recent investor alert about these types of scams. While offerings of pre-IPO shares in a company are not uncommon, unregistered offerings may violate federal securities laws unless they meet a registration exemption, such as restricting the private offering to "accredited investors"-- investors who meet certain income or net worth requirements.
Investors should be mindful of the risks involved with an offer to purchase pre-IPO shares in a company. As with any investment, we encourage investors to research thoroughly both the investment product and the professional offering the product before making any investment decision.
May 10, 2012 | Investor Alert

Mid-year economic conditions have provided more reasons for investors to take a defensive posture.However, we adhere to our 2011 forecast of modest single-digit gains for the stock market in 2011, despite recent economic data introducing more market volatility. We do not envision a return to recession or a bear market for several reasons including:
Nevertheless, we believe the recent spate of weaker-than-expected economic reports, while driven in part by a number of temporary factors such as supply chain disruptions stemming from the Japan earthquake and tsunami, signal the economy has entered a period of slower and uneven growth.

E-Statements are your very own bank statements that are sent to you by email.  They are a quick and easy way to access your bank statements 24x7.  You can access your statement as well as your check images anytime it is convenient for you.  It's safe, efficient, and protects the environment.  Make the switch today.
June 10, 2011 | E-Statements

The end of 2010 brought continued good news for domestic stocks as both the Dow and S&P 500 indexes hit fresh two-year highs. The NASDAQ is now just under 7% away from its 2007 high of 2,861 while the small-cap Russell 2000 retained its grip on the leadership position for the year-both have more than doubled since their March 2009 lows.
December 29, 2010 | End of 2010 Market Recap

For the third consecutive week, domestic equity markets continued their surprising September rally, returning both the Standard & Poor's 500 and the Nasdaq to positive territory for the year. The S&P 500 is now down just 7.5% from its high this spring.
September 18, 2010 | Market Recap

The Federal Deposit Insurance Corporation (FDIC) has notified financial institutions that it has received numerous reports of suspicious telephone calls about the caller claiming to represent the FDIC and is calling regarding the collection of an outstanding debt. The bogus callers have claimed that they are collecting on delinquent loans that were applied for over the Internet or were made through a payday lender. The loan may not even exist; regardless the caller attempts to prove the authenticity of the claim by providing sensitive personal information such as name, Social Security number and date of birth. Never give anyone this information unless you, the customer, initiate the call. If you or someone you know has received a call similar to the call described in this article, refer to our Fraud & ID theft section for information on how to proactively protect your sensitive information. The FDIC does not collect debts from operating lenders and financial institutions.
September 8, 2010 | Phishing via telephone

A man from Springfield recently received a 55-month federal prison sentence for a bank fraud conspiracy and a tax fraud scheme. Max Snodgrass, 32, created more than $100,000 in counterfeit checks. Along with the $100,000 in counterfeit checks, Snodgrass also helped file bogus tax returns that totaled $108,599 along with his crew that consisted of John Sedersten, Karen Harris, and Bryan Ray. The U.S. Secret Service, IRS-Criminal Investigation, and the Greene County Sheriff's department investigated the cases.
June 1, 2010 | Counterfieting

The Seymour Bank offers a variety of loans and works with many different loan programs. One of these programs is the Small Business Administration. The Seymour Bank has partnered with SBA to help start-up and existing businesses. SBA has done this by guarantying a portion of the loans made by a participating lending institution. This reduces the risk to the lender and often leads to a lower interest rate for the borrower, who remains obligated for the full debt, even in the event of default. Through the American Recovery and Reinvestment Act, SBA has relieved the fee associated with these loans and has increased the guarantee backing them. The act has been renewed three times and under the current extension enacted in April, SBA was able to continue reducing loan fees and provide higher guarantee levels through May 2010, or until the funds provided were exhausted. To see if this bill has been renewed or if a SBA program is right for you visit www.SBA.gov. Questions regarding this program or any other lending programs contact a loan officer at The Seymour Bank and they will be pleased to assist you.
May 15, 2010 | SBA Loans

With technology and advances in web security more and more information is secure from cyber-criminals yet they have found an easy place to get it--you. Phishing (pronounced fishing) is a technique that criminals use to lure or trick a user to divulge information they would have not normally given. Contrary to common misconception phishers don't use the Internet exclusively, in fact some of the most effective phishing scams didn't take place in cyberspace, instead they used the telephone to call someone while pretending to be someone else, for example, your credit card company or the FBI. Regardless of the method of phishing, there is one common goal: your information. The Seymour Bank will never contact you and ask for your information over the phone, in an email or online. If you suspect in any way that someone is phishing for your information immediately terminate the transaction (hang up the phone, close the email or close the online session) and contact the company by telephone using a phone number from a trusted source like your local telephone book or address book--not from an email, text message or a phone number given to you in a phone conversation.
March 30, 2010 | Phishing

We have a variety of different checking account options to fit your specific needs.
Explore Checking Options